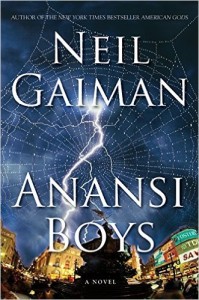 Anansi Boys was widely promoted before its release as a sequel to Gaiman’s novel American Gods. But it has little relation to that earlier work. Anansi does appear briefly, and some stories are told about him, both in dialogue and in the narration. However, this novel focuses principally on Fat Charlie Nancy, Anansi’s mortal (and oblivious to his heritage) son.

At first, the story comes across as very similar in structure to Gaiman’s earlier novel, Neverwhere. Fat Charlie (like Richard from Neverwhere) is a luckless loser, who starts out the story in what is clearly the wrong job, with a girl he is clearly not meant to be with, until he finds himself drawn into an unbelievable world he never knew existed.To summarize the novel would be to give too much away, and the book really thrives on the freshness of its surprises and twists. And to summarize it wouldn’t do it justice. All that ought to be said is that Fat Charlie lives a relatively safe and comfortably boring existence until his estranged and embarrassing father dies in a spectacularly embarrassing way. Returning to the United States from his home in London to put his late father’s affairs in order, Fat Charlie finds his world thrown into turmoil by the twin revelation that, not only was his father a god, but that Fat Charlie has a brother he never knew about. His troubles truly begin in earnest when he casually invites Spider, his brother, into his life, and then finds he is unable to make him leave it. Spider causes havoc with Charlie’s life at home and at work. Desperate to get his life back, the steps Fat Charlie takes to get rid of Spider lead to their own problems for everyone, and what follows is a high-speed adventure to control the damage, save some lives, and maybe bring Charlie out of his shell a little.

Perhaps popular trend and the market right now are flooded with “modern fantasy” and Anansi Boys isn’t really breaking any totally unexplored ground in that regard. But this is a genre that Gaiman himself helped to pioneer and popularize, and this novel is far from the worst of its kind. Gaiman employs the premise that the old gods walk among us, as he did in American Gods, and in this book we find that a few mortals know a little bit about it.

Gaiman uses very abstract mechanics for his ideas of the nature and power of divinity. The methods are very iconic and primitive. His use of totemic or archetypical animal beings, otherworldly creatures who are simultaneously wholly human and wholly animal in appearance, is very well-described. As he writes, “It all depends on how you look at it.” The exact details of How Things Are Done (capitals for significance, of course) are loosely defined, and in the course of the storytelling, they don’t really matter that much. Reality is flexible for certain people, and that’s all you really need to know.

The characters are mostly well-developed without being described in endless detail. For example, Gaiman never once says that Fat Charlie is black, but he describes some people as being white, such as “She was a white woman who…” It’s all in how you look at it. This technique works, but a few characters could be described in more detail. We never really get into the head of Rosie, Fat Charlie’s fiancée, even though we occasionally get the narration from her point of view. Likewise, the role for Daisy, another girl with a flower name, whom Fat Charlie meets after a night on the town, is never really in doubt, and we sort of accept the inevitable, unlikely or loosely founded as it is. One could guess by their names their relative significance to Fat Charlie. Nevertheless, they, and all the other characters, take their parts in the drama in their own unique styles. There are no boring characters. The book is far too short, and flows too quickly to ever be boring.

And this is the book’s true strength. Gaiman’s writing style is very enjoyable, and this novel fairly flies by. If a book about a spider god can be said to fly. The tale is fast-paced, and once into it, the reader is very reluctant to put it down. Gaiman’s wit, humor, and storytelling skill entertain and educate, the latter with the use of the various legends of Anansi, which he tells through dialogue and narration. The tone is humorous, and almost conversational, as if this is your buddy Neil telling you a story at a party about a guy he knows.

I thoroughly enjoyed reading this book, and though I rarely reread novels, I will probably give this one another reading after a few months. It was a fun time, and the worst part about the ending was that it arrived too quickly.

This review initially appeared on Amazon.com in 2005