↓
Home Menu ↓
Home→Review→Book Review: The Color of Magic (Or The Colour of Magic if you prefer) 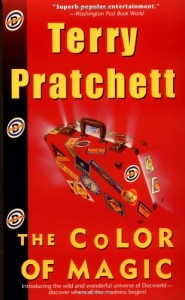 The Color of Magic is the first in the extremely long but now sadly finite (R.I.P., Sir Terry) Discworld series. In the first novel, the central character is Rincewind, a failed wizard with a craven nature. Rincewind meets up with the Discworld’s first tourist, an insurance salesman named Twoflower from a far-off continent. They pair up because Rincewind seems to be the only person in the city who can speak a common language with Twoflower. Together, they maneuver themselves through various situations, manipulated by the gods who sit above and move them like game pieces in some contest only they understand. And Twoflower’s luggage, made of sapient pearwood, loyally follows along with them wherever they go.

Through this premise, they encounter a series of adventures that parody the fantasy genre. They run afoul of a dragonrider enclave, a reference to Anne McCaffrey’s Pern series, and a fairly amusing one. There were a few other obvious tributes for veterans of the genre. Bravd and the Weasel were clear references to Fritz Leiber’s Fafhrd and the Grey Mouser. Hrun the Barbarian is a standard Conan type. We are introduced to various aspects of the Discworld itself. The physics of the seasons of a flat world with an orbiting sun, and the terminology resulting from its nature, detailed in an early footnote, were interesting.

The problem with the story is that it’s just a little … dull. I did like the book, but not as much as the other Discworld books I’ve read. I’d read this one years ago, and the disappointment I’d felt in it after hearing so much about Discworld put me off reading any other Discworld books for a long time. But constant raving by the loyal fan base caused me to abandon my misgivings and read more of the seires. And I’m glad I did. But even after rereading the first one with a little more of the series under my belt, I decided it wasn’t just a first impression. This is just not as good as some others in the series. The series can’t be judged by its beginning.

This story was a little too much of a revolving door of other stories and characters. I’m not that fond of Rincewind, the main character in this one. He’s not very interesting, and after a while I found him a little annoying. The tourist character, Twoflower, wasn’t really consistent. Throughout most of the book, he’s a sort of blissfully ignorant, cheery rube, blundering on protected from harm by his own inability to understand the danger he’s in. But at a couple points in the book he becomes uncharacteristically angry or wise. Also the first time he’s described, the writer says he has four eyes, but it’s not really clear that this is because the person viewing him has never seen eyeglasses before. And also somehow Twoflower at some point becomes able to converse with people besides Rincewind without having a common language.

There are a few good funny lines in the book, but not enough to really say the book was funny cover to cover. There were a couple parts where I did really laugh out loud, but not enough to call this pure comedy. Pratchett is often called the “Douglas Adams of Fantasy,” but I feel the comparison to Douglas Adams isn’t really accurate. The sense of humor is vaguely similar, but The Hitchhiker series had something funny on almost every page, sometimes at the expense of the storytelling, which suffered a little bit with the side-conversations that went nowhere just for the sake of a laugh. For the most part, The Color of Magic was pure parody of the fantasy genre, and the humor is more subtle. Expecting a quotable “joke” as often as in the Hitchhiker series is bound to lead to a disappointment.

The other Discworld books I’ve read are better than this. Fortunately, one doesn’t need to read all the books sequentially to get the most enjoyment out of the series. Although there are over 30 books already, there are several smaller subseries focusing on various characters. I’ll probably skip all the ones that focus on Rincewind, but I plan to read several more in the series. If this is the first Discworld book you read, you may also be put off the series, but I assure you, it gets better.

This review originally appeared on Amazon here, dated September 26, 2005, but has been edited to reflect Sir Terry’s passing)

Get your own copy!