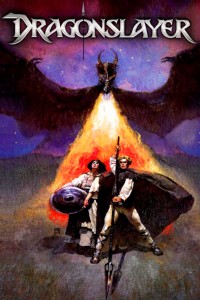 Our second episode, and our second dragon movie. In this one, the dragon is the villain. In Dragonslayer:

A young wizarding apprentice is sent to kill a dragon which has been devouring girls from a nearby kingdom. (IMDB)

This one is actually pretty significant to me (Chris), since it was in theaters when I started playing D&D, and I had the Marvel Comics adaptation on hand when making up my first ever D&D character, who happened to be a magic-user named Galen. Will the sentimental place it holds color my ability to critique it? Has time been kind to this masterpiece of personal history?

A word of warning on this episode. I messed up the recording a little bit on my voice. I had it recording from the laptop mic instead of the headphone mic. I cleaned up the sound as much as I could, but it still has a bit of ambient reverb to it that I couldn’t quite get rid of. I apologize in advance, and we’ll have much better quality next time.

Didn’t catch the movie? You can find it here: