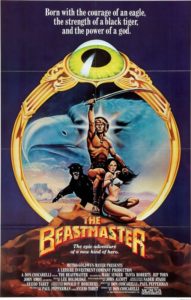 A sword-and-sorcery fantasy about a young man’s search for revenge. Armed with supernatural powers, the handsome hero and his animal allies wage war against marauding forces. (IMDB)

Once upon a time, there was a movie called The Beastmaster, and just about everyone who was into gaming and fantasy went to see it, or rented/bought the videotape. I wouldn’t be surprised if this movie kept Blockbuster afloat in their early years.

Unfortunately for this movie, time also happened. Here we are, 35 years after it was released, and we’re giving it another look.

Join Pete, Sharon, and Chris as we delve into the things we loved about it and things we learn about it today.

Get your own copy today!