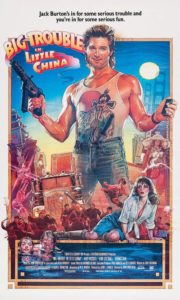 An All-American trucker gets dragged into a centuries-old mystical battle in Chinatown. (IMDB)

This one has been a long time coming. We had to decide if we were going to get into the modern age, and then Pete had to pony up and suggest it. Chris would have suggested it two choices ago, but he knew Pete would eventually get to it. Now it’s coming, and it’s going to be grand.

The biggest question in Little China is going to be whether the classic holds up or if our fondness is tinted with overmuch nostalgia. Sharon will be our test case for this, as she’s never seen the movie before, or at least has no memory of it.

Join us as in our next adventure into Lo Pan’s parlor.

Get your own copy today!