↓
Home Menu ↓
Home→Episode 31 – Prince of Persia: The Sands of Time 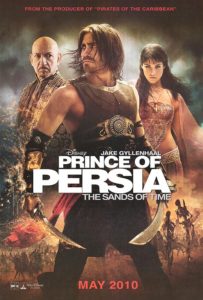 A young fugitive prince and princess must stop a villain who unknowingly threatens to destroy the world with a special dagger that enables the magic sand inside to reverse time. (IMDB)

We are joined by a new host, Matt (AKA MD Presley), who sees a lot of scripts in his day job. We figured a guy that sees a lot of scripts really needs to hear some read out from time to time so we subjected him to fantasy movies. Pete, Sharon, and Chris join Matt to talk about the 2010 Disney effort to jumpstart a franchise with Prince of Persia.

This is a pretty good example of what happens when you get Disney money to make a videogame movie. There’s a whole host of other movies based on videogames with a lot of budget problems. This is not one of them. We talk about the production, the casting, the translation of a game plot to a movie plot, and the logistical issues with wearing sneakers in the sand. A good conversation and a good time was had by all.

Get MD Presley’s books on Amazon

Get the movie before listening to the show: